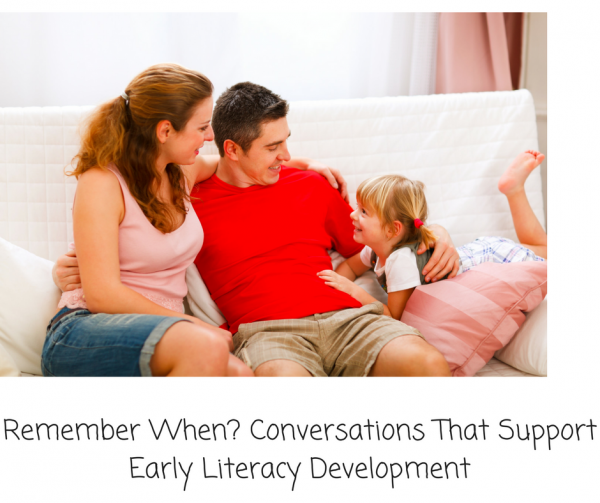 If you’ve ever chatted with a preschooler, you know they are eager to tell you all sorts of stories. From what they did they over the weekend to how Mommy burnt last night’s dinner, young children love to share their stories! Early forms of storytelling emerge during the toddler years.  By 2-3 years of age, toddlers talk about past events such as telling their teacher about a birthday party they attended over the weekend. By preschool, children are participating in show and tell, sharing objects with their peers and telling where the objects came from and what they did with them (Westby & Calutta, 2016).

As children engage with their caregivers through early stories, they start to develop a sense of themselves.  This is how they start to remember their experiences. The way in which parents talk abut events of the past actually helps children with their recall of events (McGuigan and Salmon, 2004).  This is important because children’s memory of events is how they start to construct personal stories. Parents and caregivers who use a specific style of conversation known as elaborative actually help their child develop their storytelling skills.

Elaborative parents ask open-ended, along with wh– questions.  They follow topics introduced by the child and encourage problem-solving. The following conversation is from an article by Carol Westby and Dr. Barbara Calutta (2016) The conversations are between a parent and their child after playing “zookeeper.”

Mother: What’s up with the baby elephant?

Child: It was lost.

Mother: It was lost? Why were you looking for him?

Child: I was the zookeeper.

Mother: I bet the zookeeper was worried about the baby elephant. What did you do to try to find him?

Child: I talked to the giraffe.

Mother: And what else did you do with the giraffe?

Child: I brushed his fur.

Mother: He must have liked that. His fur was all matted—stuck together.

Child: And I shined his feet.

Mother: You did! I had forgotten about that.

Notice how the parent elaborates on the child’s topics of conversation.  She asks questions, follows the child’s lead, and invites him to participate in the conversation. Let’ compare this to a “repetitive”/ low elaborative style:

Mother: But what animal did you play with first? Didn’t you take care of the giraffe? Did you do anything with the giraffe?

Child: Mmm, we brushed him.

Mother: Hmm? You brushed him.

Mother: I’m asking you! Did you brush him?

Mother: What else did you do with the giraffe?

Mother: Yeah, but what else did you do with the giraffe? Do you remember?

This interaction sounds more like “quiz” than back and forth conversation. The parent does not follow the child’s lead, but rather insists that he answers her questions. There are limited opportunities for additional learning and to construct the story together.

Quality of parent reminiscing in the early years actually predicts aspects of storytelling in adolescence, both personal and fictional. In 2008, Wenner and colleagues found that parents of children who used questions that began with who, what, when, where, why, and how actually told more complex fictional stories. In their study, use of the question words when and how helped the most in facilitating the development of stories in preschoolers. This is because these question words draw attention to the sequence of events and how they occur. For school-aged children, the use of why helped develop the ability to tell fictional stories. “Why” questions help draw attention to causal connections between events.  Furthermore, children’s narrative abilities at age 5 predicted their reading comprehension abilities at age 8.

Storytelling is critical for academic success and literacy. The roots of storytelling begin early in life. As caregivers and parents, we can directly influence the development of these skills. By following a child’s lead, asking open ended questions, and elaborating on their interests, parents, teachers, and therapists can help children develop their memory and storytelling skills.  Everyday conversations with your little one can be powerful opportunities for learning!