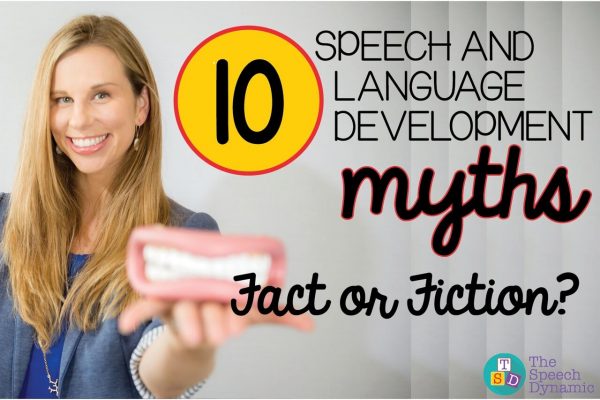 “Baby talk” refers to the high pitched, sing song voice we use when we talk to babies. Also called “motherese” or “infant directed speech, “baby talk” actually aids babies in language development: There are a number of ways baby talk aids in language development: 1) Babies actually prefer to listen to this type of speech. Even new-borns prefer this type of talk. 2) Baby talk lets the baby know the conversation is for them. This helps as babies start to learn about the world around them and the words associated with the world 3) Baby talk helps babies discriminate between sounds and words. As they start to segment speech, these pitch variations give the baby a “leg up” in starting to segment sounds and words in the stream of speech.

Telegraphic speech involves using phrases with little or no grammar. Examples of telegraphic speech include “Where cup?” (instead of “Where is the cup?”), or “Dada spoon” (instead of “this is Dada’s spoon”). According to Marc Fey, PhD., Professor at the University of Kansas Medical Center, Department of Hearing and Speech, telegraphic speech may hinder children’s learning of grammar and word meanings as it deprives children of the helpful cues and information that come from grammatical speech. Children learn about language and grammar from hearing language and grammar. Try to use short, simple phrases or sentences with proper grammar.

Learning a new word from a flashcard teaches a child to say a word in response to a picture. This  does not mean that the child truly understands the meaning of the word. New vocabulary is learned during meaningful interactions in everyday life. Roberta Golinkoff, PhD., co-author of “Einstein Never Used Flash Cards: How Our Children Really Learn and Why They Need to Play More and Memorize Less”, explains that “babies learn best through playful interactions with people who love them”

4. Speech therapy is done in a “therapy room”

Many years ago, children were seen in a “therapy room,” where they were “treated” by a Speech Pathologist. Research now shows that the involvement of parents in their child’s early intervention was critical for language development in the first 5 years. Furthermore, the earlier parents are involved, the better the outcome for the child. This is why it’s so important for parents to be a part of their child’s therapy.

5. I should “insist” my child repeats a word after me

The latest research in this area confirms that girls do tend to talk sooner than boys and reach all milestones sooner than boys, but only by a little bit. This is true for the number of words produced, the number of words understood, sentence complexity and sentence length. Researchers suspect this is for one of two reasons: Biological theorists argue that that girls mature sooner than boys and the part of their brain devoted to language development specializes sooner. Social theorists argue that this is because girls elicit more conversation than boys around them. These differences even out within a few months.

Using signs of pictures actually facilitates verbal language development. When we use a sign or picture,  we are giving the child a visual cue. This helps them with both comprehension and learning about the word. Pictures and signs also give children a way to express themselves before they have the words, therefore alleviating frustration. In their 2016 research review, Sennott,  Light, and McNaughton found consistent positive and large main effects for social, vocabulary, and grammar for young children who are beginning communicators using pictures and aided language stimulation.

9. Late talking children, who are otherwise developing normally, always “catch up” to other children their age.

Research indicates that approximately 40-50% of children who are late to talk (who have typical skills in other areas) do not catch up on their own.  Even when late talkers appear to catch up to other children their age, they are still at greater risk for difficulties with reading, social skills, and later academic success. If you are concerned about your toddler’s language development, consult a Speech Language Pathologist. The earlier a child receives intervention the easier it is to catch up, and the better the prognosis. This is because the bulk of language learning takes place in the first five years. Brain development is the most rapid and children are more receptive to learning and enriching experiences than they will ever be.

Scientific research indicates that not only is learning a second language not a bad thing, it gives young children some real advantages. In fact, research on French-English bilinguals showed people who were bilingual performed better on a variety of cognitive tasks, perhaps because they learned how to be become better seekers of patterns and rules. While the vocabulary of each individual language might be smaller when counted separately, the total vocabulary of bilingual children is comparable to monolingual children when both languages are taken into account. Children learning two languages at the same time will go through the same developmental patterns in both of their languages at roughly the same time as children learning one language. Furthermore, research shows that the earlier children learn a second language, the better. Young children are primed to “soak up” and learn the language around them.  So what language strategies should parents use? In their article , “Bilingualism in the Early Years-What Science Says,”  Krista Byers-Heinlein and Casey Lew-William state that  the best answer is that parents should use whatever strategy promotes high-quality and high-quantity exposure to each of their child’s languages. This could include structured approaches such as using different languages as a function of person (one-person-one-language), place (one language at home, one language outside), or time (alternating days of the week, or mornings/afternoons).

Brooke is the owner of The Speech Dynamic, where she provides play based and family centered speech and feeding therapy. She is the co-creator of “Wiggle time,” an interdisciplinary curriculum for pediatric therapy.  She has presented at The North Carolina Exceptional Children’s Conference regarding embedding language into routines. She has also shared her expertise on a panel for The University of North Carolina at Chapel Hill. Brooke has a passion for helping families understand the importance of play for speech & language development.