Talking with Our Hands; How Gestures Predict Words 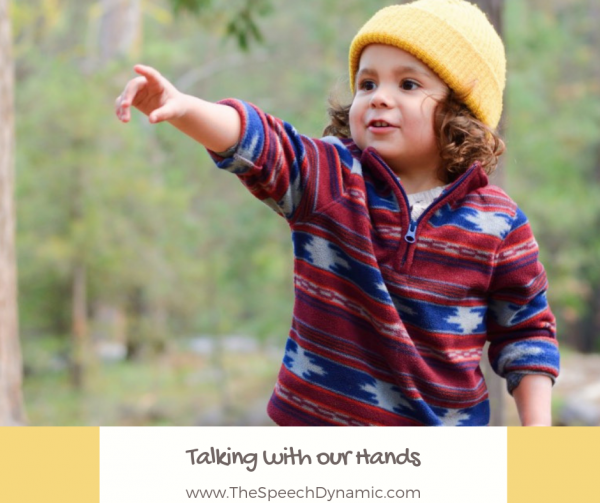 Children use gestures before they use words. Early communication tends to be through children’s hands rather than through their mouths.

By 12 months, babies point to objects and use these conventional gestures:

For Amy Wetherby’s complete “16 Gestures by 16 Months handout”, click here. This article explains when  children develop gestures and how to spot potential language or learning difficulties.

What you may not know is that there are different kinds of gestures:

2) Complementary Gestures: Saying the word + pointing at the same time

Why do we care about gestures?

Gestures are a window into a child’s communication abilities. The age at which ideas are expressed through gestures predicts the age at which the same ideas are expressed in speech.  (Goldin-Meadow, 2015).  This means that gesture use can serve as a predictive factor for children who will have difficulty with spoken language. It can also serve a tool for intervention, that can be implemented even before the delay in spoken language is detected. (Goldin-Meadow, 2015).

“Gestures not only precede, but also predict the onset of linguistic milestones”

The more children use gestures early on, the more words they are likely to have in their spoken vocabularies later in development (Susan Goldin-Meadow, 2015). Researchers can actually predict which particular words will enter a child’s spoken vocabulary by looking at the objects a child uses gestures to communicate about. (Iverson & Goldin-Meadow, 2005). For example, a child who does not know the word “dog,” but points to a dog to communicate something about it is likely to learn the word “dog” within three months (Iverson & Goldin-Meadow, 2005).

Changes in gesture use also predict use in language and the onset of sentences. Researchers found that the age in which children combine words with gestures to create new meanings (supplementary gestures), reliably predicts the age at which they produce two-word utterances (Goldin, Meadow, and Butcher, 2015).

Gesture use has also been found to predict changes in narrative structure (Demir, Levine, & Goldin-Meadow, 2014).  In a study looking at how children retold a story, the children were able express the character’s perspective through gesture even when they could not yet do so in speech (ex: acting out the actions of the character).  Why? Early gesture use may be an indicator of overall communication skills and language abilities (Goldin-Meadow, 2015).

What can you do to encourage gesture use?

In a study by LeBarton et al (2013), the researchers found that the more children gestured during a training period, the bigger their vocabularies were two weeks later.  Encouraging children to use gestures from an early age has the potential to increase the size of their vocabularies, and perhaps facilitate the onset of a variety of language constructs.

Using gestures with your child draws their attention to an object and therefore the language  associated with it.   Not only does this facilitate word learning, but it also shows your child how to use gestures, which may in turn facilitate their own word learning.

Here’s how to incorporate gestures to facilitate your child;s language development: