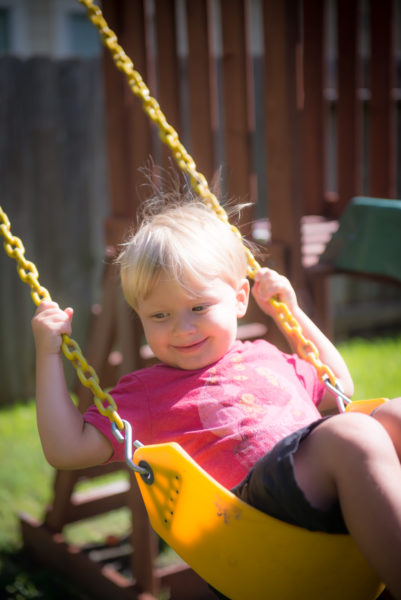 One of my favorite memories of being a kid was going to our beach house during the summer. Our neighbors had four kids and as an only child, I loved having so many kids to play with! Our favorite game was “kick the can” and we would hide and try to steal a shot at kicking an empty bottle filled with rocks.

Games such as “kick the can” and “hide and seek” are known as “people games.”  Although these are two examples of “later people games”, “early people games” start as early as 2-12 months. People games have several things in common. They all involve having fun, imitating actions, saying sounds or words, and back and forth turn-taking (Hanen, 2012).  These skills are the foundation for later social and emotional development.

Foundational concepts such as joint attention, imitation, attachment, engagement, and self-regulation are all being built while playing early people games. These are the same skills that allow children to later participate in the games we know and love. Babies  learn the roots of turn taking during people games. These skills develop into pretend play as toddlers and more cooperative play in the early preschool years.

Skills developed during early people games such as “peek a boo” are the same skills used for later games such as “Hide and Seek.”  Chasing your toddler and telling them “I’m gonna get you!” develops the skills necessary for games such as “tag” in the elementary years.  In addition to the many social-emotional benefits of people games, children learn how to “learn as a part of a group”, a skill necessary for academic success (SocialThinking, 2013). Read more on this topic in my article, “Why Play?” here.

When playing people games with your baby or toddler, keep these things in mind. 1) Try to be completely present. This can be difficult, especially in our 24/7 society.  Simply making a conscious choice to be present can make a major impact 2) Make the game into a routine – try to keep the structure the same each time during a people game so that your child knows what to expect 3) Once your child knows the routine, make a small change. This can be something like changing the ending to something unexpected 4) Wait –try wait at the “high point” of the game and allow your child to fill in the pause (they can fill it in with anything – a word, a sound or a gesture) 5) Incorporate your child’s preferences into the game. If they love tickles, incorporate tickles into the ending. Most importantly, have fun! True fun and connection is the cornerstone of people games. Enjoy this time with your child and relish in all of the benefits you are giving them simply by playing!

Hanen Early Language Program, 2012. Coaching Parents in How to Play.

Brooke is a Pediatric Speech Pathologist and the owner of The Speech Dynamic PLLC, where she provides play based and family centered speech therapy in the Houston area, She is the co-creator of “Wiggle time,” an interdisciplinary curriculum for pediatric therapy.  She has presented at The North Carolina Exceptional Children’s Conference regarding embedding language into routines. She has also shared her expertise on a panel for The University of North Carolina at Chapel Hill. Brooke has a passion for helping families understand the importance of play for speech & language development.