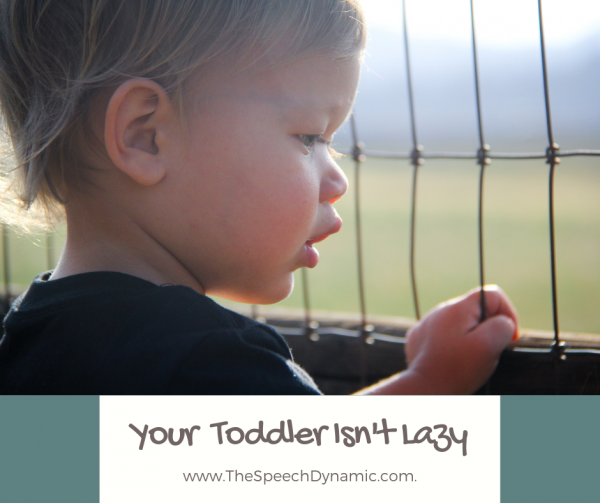 As a Pediatric Speech Pathologist specializing in early intervention  (birth to three), I get a lot of phone calls from concerned parents.  Many of them go something like this. “My toddler is not talking. He can say the words, but he chooses not to. He’s just lazy..”

Talking is hard work! Since speaking comes so easily to us, we can forget all that is involved. With about 100 muscles of the chest, neck, jaw, tongue and lips involved and coordination of the respiratory (breathing), phonation (vocal folds), articulatory (parts of the mouth that shape speech) and resonation (airflow) systems involved, it’s a wonder we even talk at all! Each word or short phrase is accompanied by its own pattern of muscular movement.  We need to think about what we want to say, plan those motor movements, and execute them with the right sequence and timing to say it!

It’s easy to forget that young children are still learning to do this. Just like anything else, talking takes practice. The more they practice, the easier it gets.  Just like any other skills, there can be progress and setbacks. In moments of frustration or dysregulation, those newly learned language skills can take a backseat to the big emotions your little one is experiencing.

Think about it- it’s actually harder to not say the word. When a toddler grunts or cries, there is more room for error in their message getting received. It becomes a “guessing game” where they may not even get what they want!  There may be frustration and tears, all delaying the intended request.  Saying “cookie,” would be far easier than all the drama that ensues from not saying it. It’s hard to imagine all of that would be on purpose.

They Would if They Could

Instead, we can acknowledge that they would if they could and they are most likely doing the best they can in that moment. This is especially true for children who are experiencing speech and language delays.  When we see that children are giving their best, we have more empathy and are better able to meet them where they are.

Rather than looking at it as defiance or laziness, we can honor their ability in that moment and scaffold (model) the next step. For example, if your toddler is reaching or pointing, you can honor their request by modeling the word for them. If they try the word, you can show them the correct way to say it. If they use a single word, you can model higher language by saying the phrase for them the way they would say it (“I want the red one!”)

When we put ourselves in a toddler’s shoes, we begin to see how overwhelming the world could be when everything is big and new. We can imagine what it would be like to have so little control over our day. Helping toddlers learn to communicate effectively gives them more control over their little worlds.  By meeting toddlers where they, we can lovingly help them grow their speech and language skills.