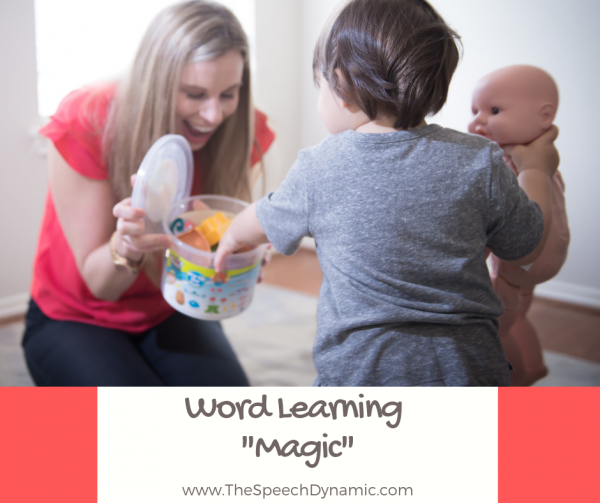 Imagine taking a walk with your toddler. A dog passes by and your curious toddler hesitantly approaches the dog. After his hesitation disappears, he smiles as he pets the happy dog. “Dog,” you say to him. “That’s a nice doggy!”

This is the magic of word learning! When your toddler hears the word that matches exactly what they are interested during that exact moment in time, word learning happens!

1)   Use child-directed speech: This is not be confused with “baby talk” (using nonsense words such as boo baa boo baa), Child-directed speech is the sing songy voice we use to talk to young children. Not only does this type of speech elongate the vowels and make them more salient, but it tells your toddler this speech is “just for you!”  In fact, toddlers between 18-24 months learn new words only when they are delivered in infant-directed speech. It’s not until they are 34 months that they can learn words whether they are spoken in infant directed or adult directed speech (Golinkoff and Pasek, 1999). Using short, grammatically correct sentences is the best way to talk to a toddler.

2)   Follow their lead:  When we follow a toddler’s lead, we are more likely to provide language input for exactly what they are interested in. In one study, babies at nine months whose mothers followed their leads and responded to what their baby was interested in, had larger comprehension vocabularies at 13 months.  Alternatively, mothers who engaged in more “intrusive behaviors” (prohibiting a baby from playing in particular ways and switching topics) had smaller comprehension vocabularies at 13 months. This is because they missed important opportunities to teach language. Since understanding words precedes using them, we can assume these babies also had larger expressive vocabularies. Following a baby’s lead and honoring his attempts a communication helps make language grow!

3)  Put the key words at the end of the phrase: Putting words at the end of a phrase makes them stand out. One study found that parents used this strategy, even in languages that do not typically end in nouns. Using the word at the end (“Look at the dog! What a cute dog!”) helps put stress on the important word.

5)    Add a gesture: Pairing a word with a gesture makes is stand out more. For example, hold your arms out wide as you talk about the “biiiig truck!” Gestures precede words. The age at which ideas are expressed through gestures predicts the age at which the same ideas are expressed in speech.  (Goldin-Meadow, 2015).  By modeling gestures, we can set the stage for learning more words.

Hirsh-Pasek, K and Golinkoff, R. The Magic and the Mystery of Language in the First Three Years of Life. Penguin Books, 1999.