What Does a Marshmallow have to do with Self-Regulation? 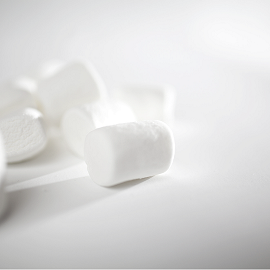 The most fascinating part of the experiment was not the results at the time, but the follow-up results later in life. As it turned out, how long the children waited predicted that child’s academic and social success ten years later! The children who waited the longest were more popular, had higher GPA scores, and were better able to handle stress. They also had higher SAT scores and performed better on neuropsychological tests.  The ability to wait fifteen minutes for a marshmallow was in fact a measure of something far greater: How well a child could handle temporary discomfort to accomplish a long-term goal (McGonigal, 2012)

Hal Ersner-Hershefield, a New York City Psychologist, wanted to test the possibility that meeting your “future self” would help college students financially prepare better for their futures. Using  age-progression software, Hershefield showed his young participants what they would look like at retirement age.   After spending time with their older selves, participants engaged in a hypothetical budgeting task.  Students who had interacted with their future selves put more than twice as much money into their retirement funds as students who had looked at themselves in a mirror!

You can see why the ability to imagine your future self is critical for academic success. Not staying up playing video games the night before a test, not waiting until the last minute to start a project, and waking up early enough to not have to rush in the morning all require the ability to imagine your future self. In fact, whenever we plan ahead we mentally practice the idea in our mind, a process called Mimetic Ideational Information Processing.  Speech Pathologist and Executive Functioning Expert Sarah Ward has coined this process “being a mind mime.”

The foundation for this begins in preschool when children are engaging in pretend play. They are imagining themselves as different people and in different roles. They are using mental flexibility to imagine a basic block is baby’s bottle or a blanket is a cape. During play, children are practicing waiting their turn (inhibition), pretending they are different people (mental flexibility), and remembering the “rules” of the game they are playing (working memory). Children must also engage in social skills such negotiation, cooperation, and sharing with other children during play. Some have even called social skills “the ultimate executive function.”

As children get older, there are other ways to support their executive functioning skills. Asking children and adolescence, “What does that look like?” vs telling them what to do can help support future thinking skills (Ward). Using “job talk” (adding an -er can also help students) picture themselves in the future (Gelman & Heyman, 1999). An example of this is telling a student, “Your job is to be a paper organizer” vs “Organize your papers.” This allows students to access their procedural memory.  Giving children tools such as planners and visual clocks can also help students with planning and organizing. Providing students with a rich vocabulary for their emotions can help with self-regulation skills as it can help them “name it to tame it” (Dr. Dan Seigel). Teaching children about their brains and mindfulness can further provide them with tools for self-regulation and executive functioning.

Executive functioning skills start developing in the first year of life and there is a peak in development in the preschool years (between 3-5) and in adolescence (15-25) (Harvard Center for the Developing Mind)  We can support these skills by encouraging children to think about their future selves. This begins with encouraging dramatic play in the preschool school years and encouraging students to imagine themselves in the future in the adolescent years. Executive functioning skills not only support success in school through helping student plan, organize, and follow through with tasks, but also supports success in every other area of our lives, including career, health, and relationships.

Mischel, W., Y, Shoda., and P.K. Peake. Follow-up to the Marshmallow Test “The Nature of Adolescent Competencies Predicted by Preschool Delay of Gratification. Journal of Personality and Social Psychology 54(1988): 687-96