Can Talking to your Toddler Make Them Better at Math? Science Says Yes! 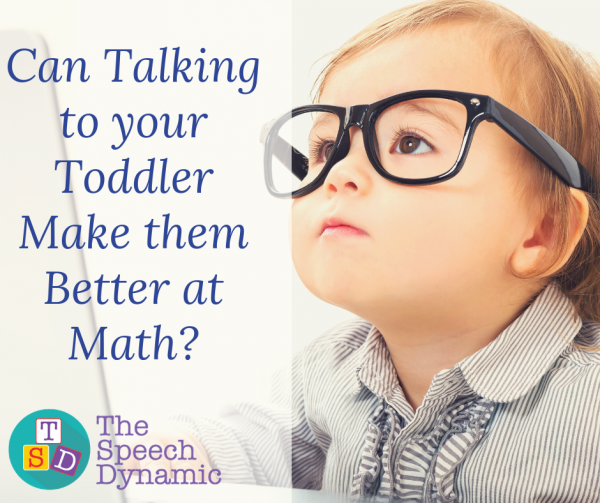 In a study by Pruden, Levine, and Hottenlcher (2011), researchers followed children between 14 and 46 months of age to explore how parent language input would predict children’s performance on three spatial tasks at 54 months of age. The types of “spatial words” included the following:

Dimension adjectives such as big, little, tall, small, and long

Spatial features such as bent curvy, edge, side, line, and corner

The researchers found large variability between the number of spatial words parents used, varying between 5 to 525. If one were to extrapolate for a week based on 8 hour days, it would yield a range of 21 spatial words to 2178 parents spatial words to children, a 100-fold difference (Pruden, Levine, and Hottenlcher, 2011)

This shows us the power of parent talk!  In addition to labeling what your child is interested in, talk about it!

Talk about the location (Your ball is under the table!)

Talk about the size (Your ball is big!) More opportunities to model spatial words!

Talk about color (This ball has blue, red, and white!)

In another study about early parent talk and later math abilities, Levine and her colleagues found that early number talk such as “That octopus has eight legs” and counting increased a child’s ability to learn the cardinal rule of numbers. The cardinal rule is the understanding that a number refers to a specific number of items in a set and can be hard for children to master.

Interestingly, the researchers found the biggest impact when parents included larger numbers (4-10) in addition to 1-3. They also found the benefit was greater was when the objects were present (as opposed to in conversation such as, “We saw two friends yesterday”). The age in which children develop understanding of the cardinal rule varies greatly and is important because mathematical knowledge at the beginning of Kindergarten predicts later math development through at least fifth grade. “By the time children are four years old, there is already a 1- to 2-year gap in math knowledge between children who are more or less mathematically advanced” (Levine & Gunderson, 2011).

The magic here is not in flash cards or “quiz questions.” The power is in everyday interactions between you and little one. When you talk about what your child is interested in, you are giving them more experience with the vocabulary associated with it. This in turn increases your child’s understanding of the words. Not only does this help build vocabulary, but according to the research cited above, using “math talk” yields impressive results for your child’s developing math and spatial skills!