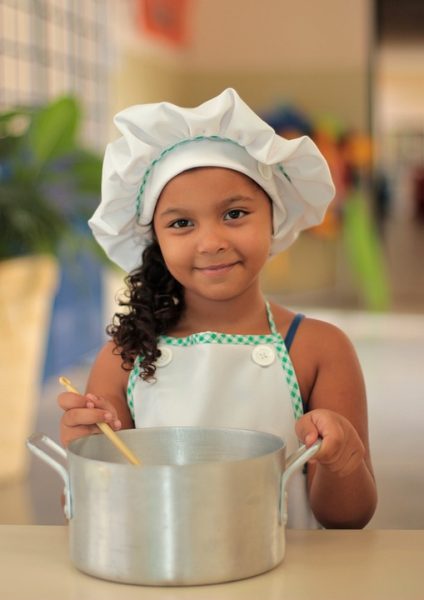 Speech therapy focuses not only on the words children are saying, but how they are communicating.  Communication is much more than talking. It’s how we connect and share our thoughts and ideas with others.

From the moment infants are born, they look for human faces. In one study, babies as young as nine minutes old preferred to look at an anatomically correct drawing of a human face as opposed to a scrambled face before ever seeing a face (the medical staff wore masks during delivery). Even before they are born, babies prefer their mother’s voice. Newborns, even 45 minutes old, can imitate our facial movements!  We are born to be social.

Although crying isn’t language, it’s one of the first ways in which a baby communicates their wants and needs and the caregiver interprets and responds. (Golinkoff & Hirsh-Pasek, 2000). This begins the “dialogue” between parents and their baby. These interactions develop into early “conversations,” in which the parent guides the conversation and the child participates passively.  These everyday routines show the baby how to take turns and build relationships (Golinkoff & Hirsh-Pasek, 2000).

Between four and eight months, babies begin to babble.  Even deaf babies babble using their hands!  During this time, cooing turns into a more advanced form of babbling called jargon, in which the baby adds the rhythm of their native language.  While interacting with a baby, the way in which we talk matters. When we interrupt a baby’s babbles, they vocalize in bursts. When we wait until they are finished, the baby will stop, look at us, and then continue their babbling. This is the beginning of conversational turn-taking.

Between nine and twelve months, babies start to discover a powerful tool. They learn that they can do something to make things happen…they can point! This signifies the baby’s understanding that communication is intentional.  Scientists have also discovered that babies who point early seem to acquire their first words earlier. In addition to showing you what they want, now your baby can comment. They can point to a dog walking by and then look back at you to share the experience.  This “triangle” of attention is called joint attention and is a key component in social communication and language learning.

Around twelve months, babies say their first words (although the range for “normal” is wide). Around the time they start to use their first words, babies use familiar objects in pretend ways. For example, they may pretend to feed their teddy bear with a spoon.  As babies start to pretend in their play, they are showing us the beginning of understanding an object can be a “symbol” for something else. Since language is symbolic in nature (i.e the word “chair” is a “symbol” for something you sit in with four legs), this understanding is important for language development.

Between 18 and 24 months, toddlers make a “leap” in their vocabulary. This usually happens after hitting the fifty word milestone.  During the second half of the second year, toddlers often experience an explosive vocabulary growth, estimated at around 63 new words per week (Golinkoff & Hirst-Pasek, 2000).  At the same time, toddlers are really starting to understand the symbolic nature of language. Several mental shifts happen which allow your toddler to think about the people, objects, and actions in their world in new ways. They can now arrange words to reconstruct new meanings (“Mom sit,” “No sit,” “Sit now!”).  As children learn they can manipulate words to express new meanings, they begin to play with objects more flexibly and express new relationships. A block can be a wand to cast a spell or bone for a dog.  Combining words and objects in new ways is what makes human language so unique. It’s what allows us to talk about yesterday, plan for tomorrow, and announce our hopes and dreams.

Between 24 and 36 months, children begin to use grammar more appropriately. This allows them to ask and answer questions, tell early stories, and learn the language associated with early social routines (birthday parties, school, etc.). Children start to learn the early “rules” of conversation such as staying on topic and adding relevant information.  Like anything else, this is a skill that needs to be practiced and developed over time.

At the same time, children are developing their play skills. They move from parallel play (play along side of other children while still engaging in their own activity) to associative play (children talking and sharing materials, but not coordinating play). They start to learn the language associated with playing with peers such as asking for a turn and saying no. This helps children build the skills for the cooperative play that will develop between four and six years.

Cooperative play involves children organizing themselves with specific goals in mind.   According to Psychologist Lev Vygotzky, play is a social activity in which children construct shared meanings and transform their understanding of the skills, values, and knowledge inherent to their culture.  In other words, they develop a “shared imagination” (Winner et. al 2014).

Within this type of play, children “try on” roles and gain an appreciation for the perspectives of others.  Early perspective taking sets the stage for developing empathy and children begin to make choices based on how they want others to feel. Perspective taking skills are critical for reading comprehension and understanding the thoughts and motives of characters in stories.  Children also build  self-regulation during play. They learn that acting on their impulses could end the play or cause peers to not want to play with them in the future.

During play, children are able imagine alternate realities (Wesiberg & Gopnik, 2013).  This “if-then” thinking is the foundation for  executive functioning. For example, when a child proclaims, “If I am the doctor, I get to wear the coat,” they are using the same type of thinking they will need to plan in school (If my project is due Friday, then I better start today).  As children try on new roles and explore new themes within their play, they learn new language and vocabulary. As they add characters and story lines, they build early literacy skills.  During cooperative play, children learn how build friendships and how to learn as part of group. In other words, this is where the magic happens!

Understanding the link between learning, language, and social skills helps us understand how play is a critical for development. Early social skills are not only important for learning how to be kind to others, but rather set the stage for academic success and fulfilling relationships throughout our lives.

Stay tuned for my guest blog on www.TandemSpeechTherapy.com to learn how you can encourage early social communication at home.

Brooke Andrews, M.A CCC-SLP is the owner of The Speech Dynamic, PLLC, a boutique private practice in Houston, TX.  She specializes in social communication, language delays and differences, and play-based learning. Brooke is the co-creator of “Wiggle-Time” and has presented at various conferences.  She shares her expertise in her workshops for parents and teachers.