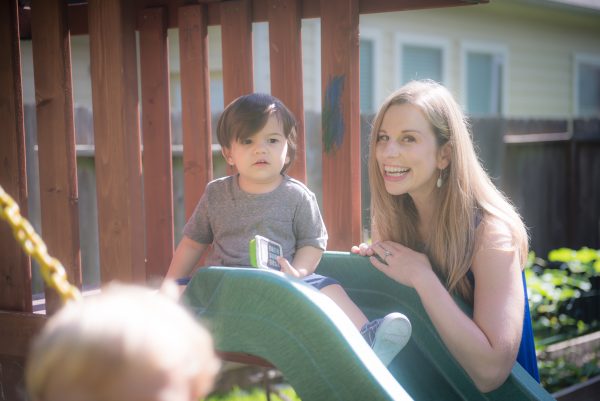 When a child has a speech disorder such as an articulation or phonological disorder, they are unable to produce, initiate, or imitate speech sounds correctly or fluently. Speech disorders can affect a child’s ability to communicate, decrease their self-confidence, and have been correlated with later language and reading disabilities.

We expect a child to be understood by:

By age 4, children should be 100% intelligible

A speech delay simply means that there is a slower rate of development than expected. Here are some characteristics of  children that present with a speech delay:

Articulation is the process by which sounds, syllables, and words are formed when your tongue, jaw, teeth, lips, and palate alter the air stream coming from the vocal folds. When an individual cannot produce or distort an age-expected sound/s, it draws attention away from the speaker’s message. Articulation disorders are motoric errors that can occur among people of any age; however, they are most common in children whose articulators have not developed properly.

The phonetic level is the motor act of producing the vowels and consonants (the sounds), so that we have an inventory all the sounds we need in order to speak our language(s).

The difficulty in distinguishing the difference between an Articulation disorder vs. a Phonological disorder is that they are both sound disorders, however understanding each disorder and their derivation is essential.  An articulation impairment is a deficiency in the ability to produce sounds motoricaly or difficulty in having two articulators meet to produce the sound in isolation, syllable, sentence, paragraph or in conversational speech which is not consistent with chronological age.  Articulation errors are considered motor-based errors.  An articulation difficulty may be defined as difficulty in producing a single or a few sounds with no pattern or derivable rule. Articulation errors are described as a substitution, omission, addition, and distortion. Not all sound substitutions and omissions are speech errors. It’s vital to take dialect and accent into consideration.  Substitution is when a child replaces a sound with another sound (wamp/lamp). A distortion error is one that a child makes when he doesn’t correctly produce a sound (frontal lisp/s).

A phonological process disorder is a simplification of the sound system that also affects intelligibility. Students with phonological process problems demonstrate difficulty in acquiring a phonological system; involving organizing the patterns of sounds in the brain and the output, not necessarily in the motor production of the sounds like Articulation errors. A phonological process is a patterned modification of the adult speech system.  For example, a phonological process called fronting is when back sounds /k/ and /g/ that are produced by the tongue moving up in the back, are replaced with FRONT sounds /t/ and /d/ which are made by the tongue coming up in the front (tat/cat, doat/goat, etc). This is typically seen in young children whose speech is unintelligible, but it can also be seen in normally developing children at the Kindergarten level.  If they are only using one process to simplify their speech, we do not usually evaluate them or enroll them in therapy.  Instead, we will monitor them and evaluate at a later time, if necessary.  This does NOT mean the child is unable to produce a specific sound as with Articulation disorders.  Instead, as described above, the child is stimulable for isolated sounds when prompted.

Both can put a child at risk for writing and reading disorders.

Please remember acquisition of sounds is variable from child to child, which is why there is a large range for some sounds.  If a child does not have /k/ or /g/ at the beginning of Kindergarten, it will most likely develop naturally IF there are no other sounds errors.  Please be aware of some of the following red flags for articulation that require immediate referral:

The phonological or phonemic level is the brainwork that organizes the speech sounds into the sound patterns to be produced. The sounds need to contrast with each other, or be distinct from one another, so that we can make sense when we talk.

Articulation (phonetic) disorder is a speech sound disorder that affects the PHONETIC level. The child has difficulty saying particular consonants and vowels. The reason for this may be unknown (e.g., children with functional speech disorders who do NOT have serious problems with muscle function); or the reason may be known (e.g., children with dysarthria who DO have serious problems with muscle function).

A phonological disorder is a speech sound disorder that affects the PHONOLOGICAL (phonemic) level. The child has difficulty organizing their speech sounds into a system of sound patterns (phonemic patterns).

The difference between an Articulation and a Phonological disorder; An articulation disorder is the child’s difficulty at a phonetic/motoric level.  They have trouble making the individual speech sounds.  A phonological disorder is a child’s difficulty at their phonemic level (in their brain). This “phonemic level” is sometimes referred to as “the linguistic level” or “a cognitive level”.

Brooke's heart is in her work, and you can tell she loves what she does

Brooke has been working with my son Colton for about a year now. She is an amazing speech path and has created a great relationship with him during that time. He is always super excited to see her, and sees the time he spends with her as play time. Yet he’s always learning. Colton has an obsession with trains, and so generally wants to show her how his trains are set up every week. Brooke manages to incorporate whatever skill they are working on into this play. Whether it was putting more than one word together, or focusing on certain sounds, or not dropping the endings of words. She also leaves us with suggestions on what to do with him over the next week to help with the goal that we are currently working on.

Brooke’s heart is in her work, and you can tell she loves what she does. If you choose to work with her, you will be happy with the results you see. Colton had had an explosion of vocabulary this year, and I know she contributed greatly to that.

My son Finnian was diagnosed with autism at age 3 and was non verbal. I remember being so scared and stressed about Finn’s future until I met his team of teachers and therapists. Miss Brooke was my son Finn’s speech therapist in his EC Pre-K classroom. She was amazing with Finn and supportive to me. Her gentle and compassionate approach was just the connection my son needed to feel safe and grow. One of my favorite qualities of Miss Brooke is her genuine enthusiasm when working with my son. I will always be grateful for her twinkling eyes and contagious smile when discussing my son’s progress and growth. Thank you Miss Brooke!

A shy child speaks up loud and clear

At the age of 2, my son’s preschool teacher noticed he was a little behind in his speech, he was muttering in a low tone. It was hard for anyone to understand what he was trying to tell us. When I was told he needed therapy, I was a bit nervous because my son is very shy around people he is not familiar with. I was afraid the speech therapist would get nowhere with him, but boy was I wrong. By the end of his first session with Ms. Brooke my son was comfortable with her; he did not want the session to end. Ms. Brooke took the time to research new ideas and activities that would accommodate my son’s needs to help him open his mouth when speaking. She focused the entire session on making sure he practiced the ability to speak up loud and clear while still having fun and kept him engaged. He only had therapy for 5 short months; Ms. Brooke gave him the confidence he needed to speak up. He continues to ask to see Ms. Brooke, he misses her so much. She left him with such great moments and experiences that I do not think he will ever forget her.