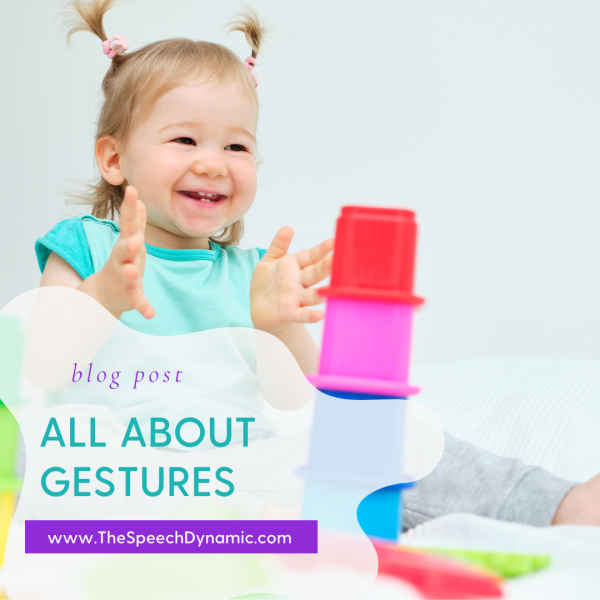 When a little one isn’t talking yet, we focus tend to put the focus on talking more. However, there are some foundational skills that little one needs before they start talking. One of these skills is gestures. Gestures come before️ words! In fact, Children who convey a wide variety of different meanings via gestures early on are likely to have a larger expressive vocabulary a few years later.

Here are a few more facts you may not know about gestures:

Children’s gesture use also predicts their narrative abilities later on. At age 5, children who can demonstrate a character’s point of view via gestures tend to produce well-structured stories in the later years. Goldin-Meadow (2015)

Deictic Gestures are gestures children use to draw your attention to something. These are actions like showing, pointing, and reaching. These come first (around 10 months)

Iconic Gestures are gestures that show an aspect of an object or what it represents. Examples are a child blowing to talk about bubbles or flapping their arms when referring to a bird. We may see some of these gestures in early play such as when a child pretends to drink from a cup

In research by Capone and McGregor (2005) and Capone Singleton (2012), toddlers learned new words for object faster when the adult made their hand shape like the object (e.g. making their hand round like a “ball”) than gestures that demonstrate the function of the object (a throwing gesture to demonstrate “ball”), pointing to the object or no gesture at all. Function gestures such as acting out what the object does also facilitated learning, but not as much as shape gestures. The authors concluded that using shape and function gestures with late-talking toddlers can be helpful.

Based on what we know about gestures, we can use gestures to help children learn new words. We know this can be especially helpful with late-talking toddlers since it helps make words more visible. Here are a few ways to use gestures with your child:

1) When targeting a word, pair it with a gesture, especially shape and function gestures
2) Use gestures when introducing a new word
3) Pair gestures with songs and movement
4) Model combining gestures such as opening your arms wide and driving a bus when saying “big bus.” Research from Goldin-Meadow, (2015) tells us that children combine gestures before they combine words. We can model combing gestures in our own speech as little ones are working towards word combinations

Goldin-Meadow, S. (2015). Gesture as a window onto communicative abilities: Implications for diagnosis and intervention. Perspectives on Language Learning and Education, 22, 50-60.