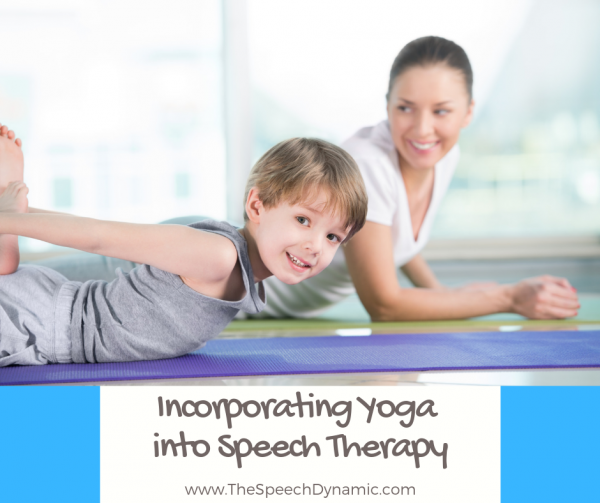 I recently completed my 200 hour yoga teacher certification. During my training, I found a lot of overlap between yoga and speech therapy. In this post, I outline five areas of speech and language development  that yoga may benefit. They are: social language, early literacy, speech production, language development, and respiration & breathing.

Yoga classes for young children often revolve around a theme. Examples include underwater, space adventures, and jungle safaris. What I love about themed yoga classes is that they promote sharing an imagination (a term from Social Thinking). By the time children are 4-6 years old, they are engaging in more cooperative play. This type of play is organized and children take on roles and work together to create a story. It requires higher level social skills such as negotiating, taking on different roles, and exploring relationships between people. Children with delays in social and pragmatic communication often struggle with participating in this type of play. Sharing a theme in kids yoga classes encourages sharing an imagination.

Yoga classes for children often incorporate games that build turn-taking. Activities that involve one child choosing a pose or an activity can foster self-confidence. Sharing their thoughts and ideas with the group can increase confidence with speaking in front of others. Partner poses provide another opportunity to target pragmatic language and social skills. 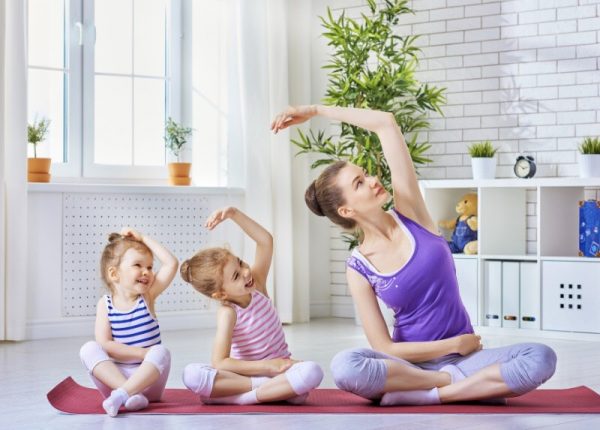 Studies show that reading to babies starting at eight months old has a significant impact on early language development (Debaryshe, 1993). Reading increases children’s exposure to the rhythm and rhyme of language and introduces new vocabulary and concepts.  It engages the imagination and teaches children about the world.  Books show children how to deal with emotions. and how to solve problems they may encounter in their life.

Books and stories can easily be incorporated into yoga classes. Books can be used in a variety of ways, including acting out the story with yoga poses, retelling stories with yoga poses, and reading books to teach concepts such as mindfulness and kindness. 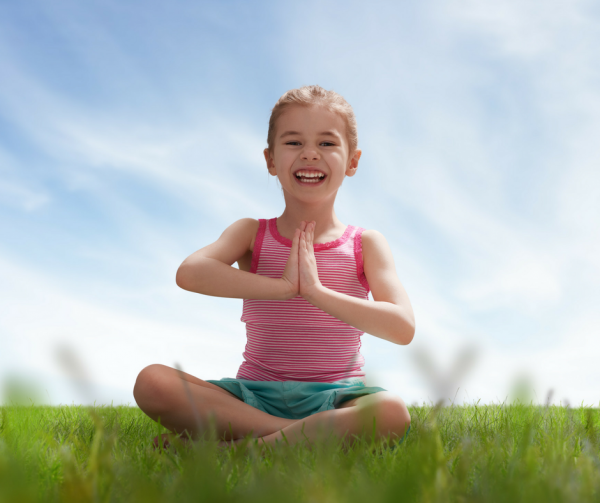 -At twenty weeks, infants begin to sit with support. Vocalizations, which were previously made up of vowel-like cooing sounds, now are interspersed with consonant sounds.

-At six months, infants begin to sit independently and are able to lean forward and reach unilaterally while sitting. Cooing changes into babbling that resembles single syllable utterances.

-At twelve months, children can walk when held by one hand and mouthing objects has almost dissapeared. Vocalizations contain more identical sound sequences such as “mama” and “dada.”

Iverson points out that specific motor behaviors provide the opportunity to acquire and practice skills critical for language development. For example, increased rhythmic arm movements coincides with the onset of reduplicated babbling (bababa).

Iverson explains that as children learn how to use objects in more advanced ways (putting them back together instead of taking them apart), their vocabulary increases. Within the context of more advanced play actions, we see the emergence of more words. Iverson hypothesizes that within these actions, children have the opportunity to attend to and learn more about specific properties of objects. This creates more opportunities to link objects with meanings created in the context of their of their actions (ex: a nesting cup is a container) Iverson, 2010.

Around eight months, infants develop the ability to produce recognitory gestures. These gestures last 2-3 seconds and indicate that the infant understand the meaning of the object. For example, putting a cup to their lips without the intention of drinking from it. These gestures generally appear around the same time a child develops a verbal word for the object. Iverson states that the naming of objects (both gestural and verbal) is born in motor action (Iverson, 2010).

By incorporating movement into our speech sessions, we can take advantage of the movement-language connection. We can teach language in fun and novel way and provide new contexts for familiar vocabulary and concepts. 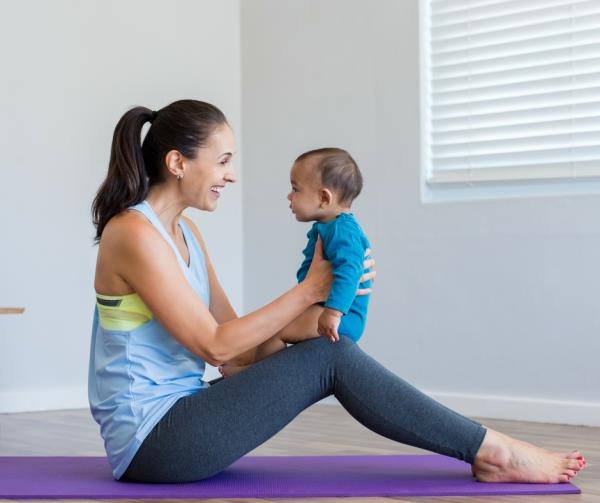 Between 3-5 months, an infant is learning to control his head, neck, and upper spine and strengthening the muscles throughout his body needed for more mature breathing (Bahr, 2011). As the baby engages in more tummy time, his rib cage moves downwards, his upper chest area is more open, his breathing slows down, and he produces more vowel sounds (Oetter, 1995 as referenced in Nobody Ever Told Me, or My Mother That). As a baby experiences different positions and movements in the body, he develops more breath control (Bahr, 2011)  Baby yoga classes encourage many different movements and positions in space. Movements are performed with the caregiver and this provides a wonderful context for bonding.

Breath support continues to develop into adolescence allowing for increased vocal intensity, improved speech intelligibility, and a greater number of words per minute (Wills, Seberg, and Economides, 2014 referenced in Yoga for Speech and Language by Longtin and Fitzpatrick).  Good speech breathing is important for speech sound development as well as helping the speaker use natural rhythm and stress (prosody).

Gross motor development precedes fine motor development. This is why therapists often say “hips before lips.” Yoga is a full body activity that strengthens the whole body and increases trunk stability. Special populations such as children with Down Syndrome often have low muscle tone. While muscle tone cannot be changed, muscles can be strengthen, therefore decreasing the impact of low muscle tone (Longtin and Fitzpatrick, 2017). Yoga programs such as Yoga for the Special Child (Sonia Sumar), offer training for yoga teachers and therapists who are especially interested in working with special populations. 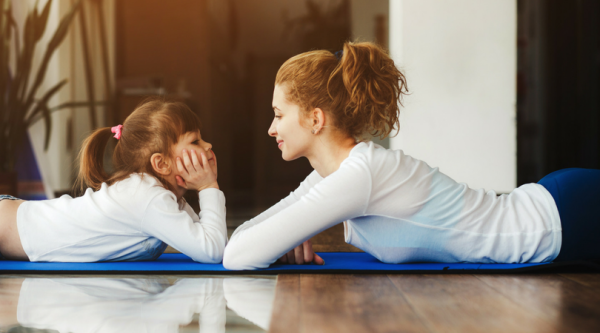 The National Scientific Council of the Developing Child states that excessive stress damages children’s developing brains, which leaves them susceptible to learning, behavior, and health issues. Research shows that mindfulness practices increase the density of gray matter in the brain areas linked to learning, memory, emotion, regulation, and empathy (Greater Good Science Center and referenced in Yoga for Speech and Language Development). Research continues to mount citing that teaching mindfulness in the classroom reduces aggression and promotes calmness (Longtin and Fitzpatrick, 2017). Children learn best when they are regulated and in a state ready for learning. Yoga promotes this state of calmness and readiness. The principles of yoga, such as listening to your body, focusing on one point (drishti), and mindful breathing all promote calmness and regulation. 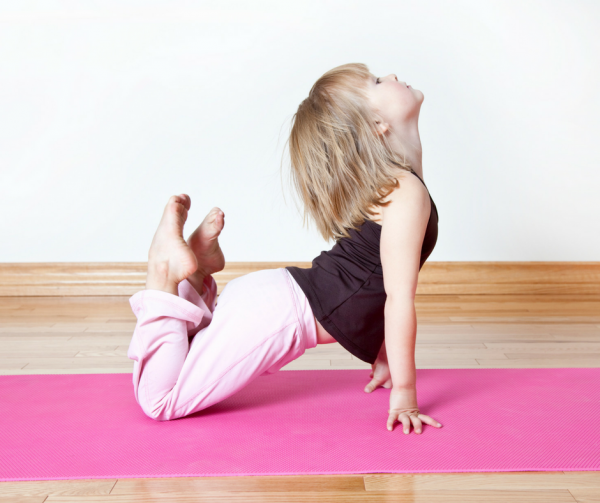 Nasal breathing provides us with optimal health benefits. Our nose is our “natural air filter,” filtering out the air we breathe. It triggers the release of anti-bacterial molecules, helping clean out the incoming air and increasing the function of the immune system. Nasal breathing keeps the nasal passages lubricated, lessening the chance of sinus infections.  Our bodies take in a chemical called nitric oxide when breathe through our nose. Nitric oxide contributes to relaxation and expansion of the blood vessels.

Open mouth breathing is associated with changes in the structure of the jaw. This can change the bite, resulting in malocclusion of the teeth.  In one study, malocclusions, including overbites, were more likely to be present in mouth breathers (Souki et al 2009). When the jaw is open, the tongue is low and forward. The tongue is the mouth’s “natural palatal expander.” If the tongue is not putting pressure on the roof of the mouth, it can result in a high, narrow palate. This impinges on the nasal cavity and can result in problems with the sinuses and respiration.  These structural changes can also affect the way a child looks. Untreated mouth breathing has been associated with long, narrow, faces, high palates, dental malocclusion, and gummy smiles (Jefferson, 2010). Changes in the structure of the mouth and teeth can also result in speech problems

When the tongue is low and forward (commonly seen with mouth breathing), it is not in the optimal “zone” for good speech. According to Speech Pathologist Char Boshart, “The desirable resting posture provides a pivotal epicenter, right in the heart of all the action: speaking, chewing, and swallowing. Wherever the jaw, lips, and tongue work, is where they rest” (Boshart, 2015). “When the tongue learns to comfortable rest on the top in the speech zone, it can easily access all speech sounds” (Boshart, 2015).

The emphasis on breath in yoga, brings a child’s attention to their breathing. Practice with breathing techniques and education on the importance of nasal breathing can be incorporated into yoga classes.

Yoga is a wonderful context for working on speech and language skills. The overlap between social learning, self-regulation, speech development, language development, and focus on respiration provides many opportunities to target specific goals related to each area. Yoga classes can be tailored to meet the needs of the child. Class formats such as individual vs small group can be choses based on what a child is working on.  There is growing popularity for using yoga in the classroom. Speech Pathologists can utilize yoga to target speech, language, and social skills in a unique and fun way. 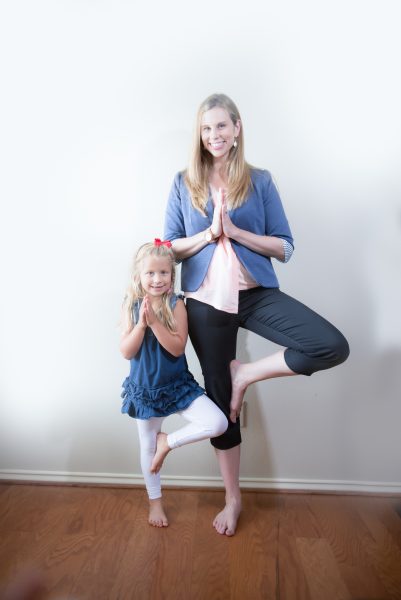 Bahr, D. (2011). Nobody Ever Told Me (or my Mother) That!: Everything from Bottles and Breathing to Healthy Speech Development. Cork: BookBaby.
Boshart, C. (2015).  The Key to Carryover: Change Oral Postures to Fortify Speech Production. Speech Dynamics
Debaryshe, B. D. (1993). Joint picture-book reading correlates of early oral language skill. Journal of Child Language, 20(2), 455–461.
Iverson, J  “Developing Language in a Developing Body: The Relationship Between Motor Development and Language Development, Journal of Child Language. 2010 March; 37(2(: 229-261